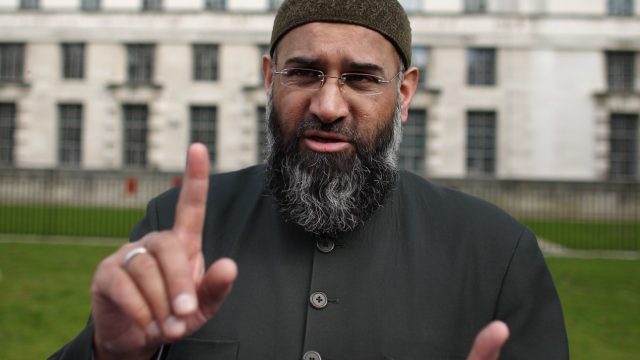 Anjem Choudary, one of the most notorious hate preachers living in Britain, is facing jail after being found guilty of supporting Islamic State.
Following years in which he avoided arrest despite his apparent sympathy for extremism and links to some of Britain’s most notorious terrorists, Choudary was convicted at the Old Bailey court in London after jurors heard he had sworn an oath of allegiance to Islamic State, also known as Isis.
The 49-year-old, who has links to one of Lee Rigby’s killers, Michael Adebolajo, and the Islamist militant Omar Bakri Muhammad , also urged followers to support Isis in a series of talks broadcast on YouTube.
Choudary and his co-defendant, Mohammed Rahman (33) told their supporters to obey Abu Bakr al-Baghdadi , the Isis leader, who is also known as a caliph, and travel to Syria to support Islamic State or “the caliphate”, the court heard.
They were convicted in July but details of the trial, including the verdict, could not be reported until now.
Choudary and Rahman face up to 10 years in jail for inviting support for a proscribed organisation. They will be sentenced in September.
Prosecutor Richard Whittam QC said: “The prosecution case is that whichever name is used, the evidence is quite clear: when these defendants were inviting support for an Islamic state or caliphate they were referring to the one declared in Syria and its environs by Ibrahim [Abu Bakr] al-Baghdadi at the end of June 2014.
“Terrorist organisations thrive and grow because people support them and that is what this case is about. Do not confuse that with the right of people to follow the religion of their choice or to proclaim support for a caliphate.”
Choudary, who has a long history with groups involved in radical Islamist demonstrations, such as the now-banned al-Muhajiroun and Islam4UK, denied he was inviting support for Isis and claimed to be a “lecturer in sharia law” giving “the Islamic perspective”.

He began studying sharia law under Syrian-born Bakri Muhammad, a Salafi Islamist militant leader who formed al-Muhajiroun with the aim of promoting sharia in the 1990s, the court heard.

Bakri Muhammad fled to Lebanon in 2005, where he was joined by Choudary for about 10 weeks. Bakri Muhammad was ultimately jailed in Lebanon for terror offences.
Choudary admitted he was media spokesman for Islam4UK during a time in which the controversial group put out “incendiary statements” calling for Buckingham Palace to be turned into a mosque and Nelson’s Column to be destroyed.
On the ninth anniversary of the London terror attacks – July 7th 2014 – Choudary and Rahman posted an oath of allegiance online under their kunyas or Islamic names, Abu Luqman, used by Choudary, and Abu Baraa, used by Rahman, on the website AlMustaqbal.net.
Between August and September 2014, Choudary and Rahman posted speeches on YouTube encouraging support for Isis.
An audio clip, lasting one hour and six minutes, uploaded to Choudary’s YouTube channel on September 9th 2014 was played to jurors.
Titled How Muslims Assess the Legitimacy of the Caliphate, the speech was played over the image of a map of northern Africa, the Middle East, north-west Asia and southern Europe.
Choudary begins by setting out his views about the requirements of a legitimate Islamic caliphate, then explains why he sees Islamic State as meeting the criteria.
“The lesson from this narration is that obedience to the caliph is an obligation, if they rule by the sharia. And to obey them obviously means they must be established,” Choudary said.
He added: “I would just say, uh you know, for people who want to live under sharia law, obviously this is a great thing, and for those people who say we are promoting Isis, they are not even called Isis any more. Rather, you have an Islamic state where you have millions of people who are governed by the sharia law and I don’t think it is against the law to go and live there and want to abide by sharia law.”
The prosecution also played an older lecture given by Choudary in March 2013, which did not form part of the charge but was provided to the jury for background.
We don’t have any borders … it is about time we resumed conquering for the sake of Allah.
In the lecture, titled Duties of the Khilafah State, Choudary makes clear his desire for the establishment of a caliphate as well as his support for the military action of Islamic State.
He said: “That is why the kuffar [non-believers] are worried, my dear Muslims. When the Muslims of the subcontinent gather together. When the Taliban inshallah [God willing] and the mujahideen take Afghanistan and then declare jihad against the mourtad of Zardini and his army of tawaghit, and when they annex and take India and they take Bangladesh and they take Indonesia, you have over a billion Muslims in the area.
“We don’t have any borders, my dear Muslims. It is about time we resumed conquering for the sake of Allah.
“Next time when your child is at school and the teacher says ‘what do you want when you grow up, what is your ambition?’, they should say to dominate the whole world by Islam, including Britain, that is my ambition.”
The prosecution told the court that the defendants were “acutely aware” of the potential criminal implications of being overt in their support for Isis.
Whittam told the court: “The prosecution alleges that this led to great care in the way in which the defendants expressed themselves publicly, particularly after Isil was proscribed as a terrorist organisation by the home secretary.”

Choudary also took to social media to express support for Isis, the court heard. In late July 2014, he engaged in a series of messages with others as to the authority for the declaration of Eid (the Islamic festival) coming from “the office of the Islamic State”.
Born in north London, he initially studied medicine at Barts medical school before changing courses and enrolling at Guildford College of Law. He opened his own solicitor’s practice in his late 20s but told the court that by that point he had become religious and his beliefs did not sit easily with certain aspects of the law.