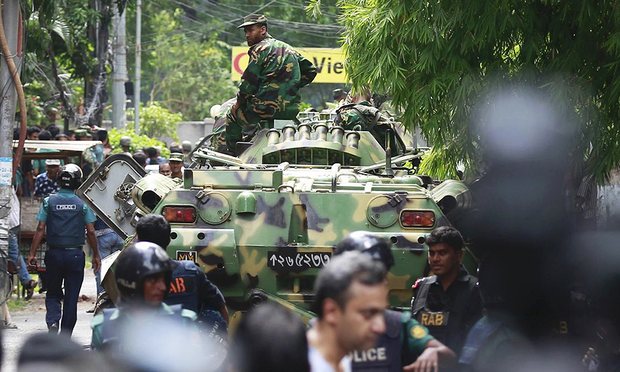 Dhaka: Five members of Jama’atul Mujahideen Bangladesh have been arrested for their involvement in the Dhaka cafe attack that left 22 people dead, as police on Friday identified a second mastermind of the worst terror strike in the Muslim-majority country.

He said over 875 grams of explosives and 25 detonators were recovered from them.

“During initial interrogations, the five admitted to their links to the July 1 Gulshan cafe attack that killed 22 people including 17 foreigners. They had entered Dhaka with bomb making raw materials to carryout fresh sabotage,” Chief of the newly formed elite police unit Monirul Islam said.

Islam said police has also identified a second mastermind of the attack by his “organisational name” — Marzan. “We have got his picture and found that he is the man who uploaded the images of Gulshan attack on his Facebook account… A manhunt is already underway to track him (Marzan) down,” Islam said.

He said the perpetrators of Gulshan attack had sent pictures of the assaults to Marzan using secret apps.

The development came two days after elite anti-crime Rapid Action Battalion claimed to have arrested six neo-JMB members including the administrator of the outfit’s website.

In a statement, RAB said that the six operatives were arrested along with “huge quantum” of explosives, weapons and ammunition.

Last week, police had announced a bounty leading to the arrests of Bangladeshi-Canadian Tamim Chowdhury and renegade army officer Major Ziaul Haque, identifying one of them as the leader of neo-JMB and other being the main organiser of outlawed Ansar Al Bangladesh or Ansarullah Bangla Team (ABT).

“The law enforcement and intelligence agencies are trying to arrest Chowdhury and Major Zia,” Inspector General of Police AKM Shahidul Hoque has said.

The police chief named Chowdhury as the mastermind of the July 1 terrorist attack and the subsequent assault on the Eid congregation at Sholakia six days later.

Independent security analysts say the neo JMB is inclined towards ISIS while ABT was ideologically linked to al-Qaeda.

Bangladesh, however, has repeatedly denied presence of any foreign terrorist outfit in the country.