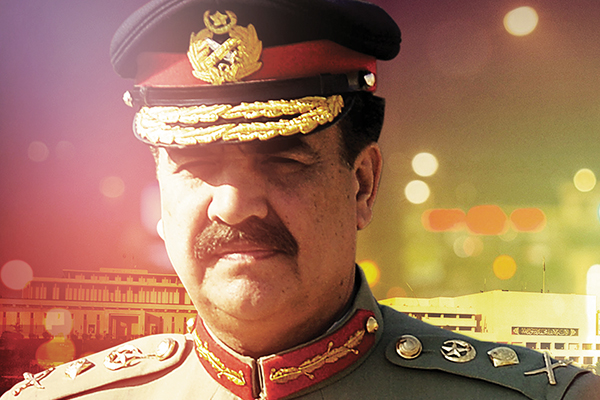 Prime Minister Nawaz Sharif has decided to decorate the Chief of Army Staff General Raheel Sharif as Field Marshal in recognition to his meritorious services in the war against terrorism, especially for leading the successful Operation Zarb-e-Azb.

Field marshal is a very senior military rank, ordinarily senior to the general officer ranks. Usually it is the highest rank in an army, and few, if any, are ever appointed to it. It is considered as a five-star rank (OF-10) in modern-day armed forces in many countries.

General Ayub Khan is the only General in the country’s history who promoted himself as Field Marshal, in 1965.

Seasoned journalist Arif Nizami told Pakistan Today that the decision had been taken by the civilian leadership after taking the army chief into confidence.

“However, it has been decided in principle that the army chief will not be given an extension in his service. Rather, the new army chief will be appointed on schedule,” he added.

Nizami said in his talk show DNA on Channel 24 that COAS Raheel Sharif may continue providing his services in one form or another. He said that due to his great services to the country, especially for his role in crushing terrorists and protecting the country from the menace of terrorism, he may also render his services for an anti-terrorism role, such as being made an “anti-terrorism tsar.”

Veteran jurist Senator SM Zafar told Pakistan Today that there is no need for any amendment to the Army Act 1952 for appointment of General Sharif as Field Marshal.

“There is no need for any amendment in the army act or the constitution. The army has to make a declaration in this regard,” he said.

Asked what powers would be enjoyed by General Sharif after the appointment as Field Marshal, Zafar said that there would be no powers at all.

“It is a ceremonial office – a recognition to the services of a general in a war. No powers, no salaries involved,” he added.

He said that a field marshal also does not retire because it’s a ceremonial office.

“It is just like an ambassador at large or a senator who does not retire. It’s a mere recognition to his services and nothing else,” S M Zafar explained.

A source in the federal government also confirmed that the proposal had been doing the rounds in the military and government circles for some time.

“Field Marshal is an honourary rank. It’s given to the rarest of rare Generals for extraordinary military service,” the source in the Defence Ministry said, requesting not being named.

The source added that the prime minister wanted to reward General Sharif for his meritorious services in the war against terrorism as well as for the democratic process.

“General Raheel is seen with respect for his role during the Dharna days in 2014. He did not take advantage at a time when the civilian regime was in tatters and many generals wanted to overthrow the government. However, General Sharif proved to be a saviour of the democratic setup,” the source added.

“General Raheel Sharif has also successfully commanded Operation Zarb-e-Azb and taken the courageous stance of ousting terrorist outfits from North Waziristan. He is also credited for bringing about a paradigm shift in the military’s top brass as he advocated that Pakistan faced an internal threat from terrorists rather than an external threat. This idea overhauled military’s strategy,” the source added.

The sources said that General Raheel Sharif had also played a key role in improving the country’s relations with its neighbours and partners, just like a true diplomat.

“When the prime minister and his team were facing difficulties on the global stage, General Sharif came forward and played his role in improving relations with Afghanistan, United States, Iran and Saudi Arabia,” the source added.

The source said that General Sharif led the country’s strategic dialogue with the US and improved relations and partnership against terrorism in Afghanistan.

“At a time when the civilian leadership created misperceptions about the CPEC by using it for gaining political mileage, leaving the Chinese top leadership concerned about the fate of the game-changing project, it was none other than Raheel Sharif who made successive trips to China and gave them an unequivocal assurance that the military will ensure timely completion of the CPEC,” the source added.

The source said that it was General Sharif who led the way for civilian leadership by reaching wherever leadership was required.

“Whether there was a bomb blast or a natural disaster – General Sharif was the first to reach the scene. Whenever a festival arrived, Raheel either went to forward posts on the border or he was among combat troops fighting against the enemy. He was visible and on the go all the time, showing the civilian leadership how a leader should act,” the source added.