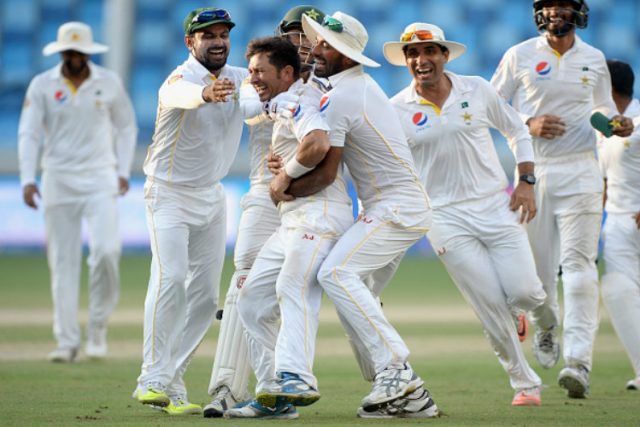 LONDON: The special 200 from Younis Khan followed by Yasir’s magical five wickets helped Pakistan to beat England by 10-wickets in the fourth Test at the Oval and end the four-match series by 2-2.

For Pakistan, it was a special win, keeping in mind it was Independence Day.

Pakistan remain third in the world Test rankings but, following this win, could rise to number one if results in Sri Lanka and the West Indies go their way.

England, 88 for four overnight, were dismissed for 253 in their second innings, with Shah taking five for 71 in 29 overs after Jonny Bairstow top-scored with 81.

Pakistan needed only 40 runs to win after excellent hundreds by man-of-the-match Younis Khan (218) and Asad Shafiq (109) had helped them compile a commanding first-innings total of 542.

Azhar Ali (30 not out) ended the match by hitting Moeen Ali for a straight six as Pakistan finished on 42 without loss.

Sami Aslam was 12 not out as Pakistan bounced back from their 141-run defeat in the third Test at Edgbaston in style.

Pakistan now travel to Ireland for two one-day internationals next week before returning to England for five ODIs and a Twenty20.