Tactical Talk (Update) Kulbhushan Jadhav, the Indian spy sentenced to death by Pakistan in a Field General Court Marshal, may be the most prominent individual to be tried on espionage charges in recent times — but Pakistan and India have a long history of arresting and trying ‘spies’.

Sarabjit Singh was arrested by Pakistani authorities in August 1990. At the time, India said that an inebriated 27-year-old Singh had strayed across the border while ploughing his field.

He was arrested on charges of carrying out four bombings in Faisalabad, Multan and Lahore which killed 14 Pakistani citizens. He was later sentenced to death.

Kashmir Singh was a convicted Indian spy on death row and spent 35 years in prison in Pakistan. Throughout his incarceration, he insisted he was not a spy. He was arrested in 1973.

Singh was pardoned by then President Pervez Musharraf and returned to India where he was given a hero’s welcome.

“I was a spy and did my duty,” admitted Singh after crossing the border, the Press Trust 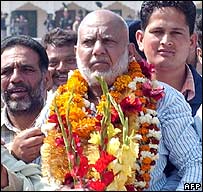 of Indianews agency reported, adding he was paid about 400 rupees a month for his work.

“I went to serve the country,” he told reporters in Chandigarh after his release.

“Even Pakistan authorities failed to get this information from me,” he added.

Ravindra Kaushik was born in India’s Rajasthan and was recruited by the Research and Analysis Wing (RAW) while working as a theatre artist.

After receiving two years of training, he was sent to Pakistan in 1975, where he enrolled in Karachi University under the alias of Nabi Ahmad Shakir.

After graduation, Kaushik joined the Pakistan Army as a commissioned officer and got promoted to the rank of Major.

During 1979-83, he passed on sensitive information to RAW. His run as a spy ended when another Indian spy was caught by Pakistani forces. The arrested spy blew Kaushik’s cover.

Kaushik was incarcerated for 16 years and died in 2001 while imprisoned in Multan Jail after contracting pulmonary tuberculosis.

Sheikh Shamim was arrested by Pakistani authorities in 1989 and was charged with spying for RAW, reported AFP.

Authorities said he was caught “red-handed” near the Pak-India border while spying. He was hanged by the authorities in 1999.