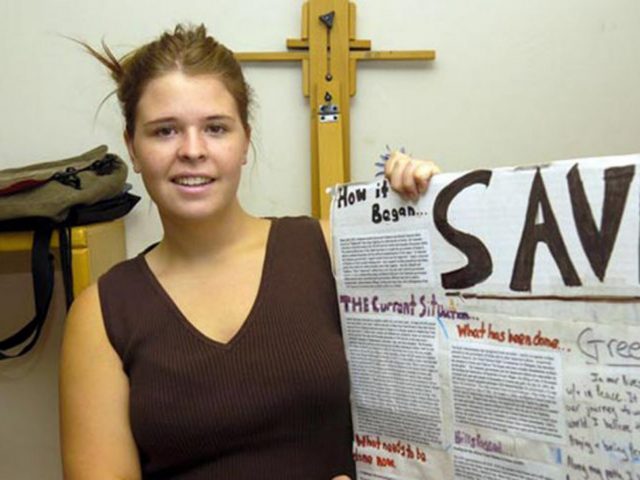 The family of Kayla Mueller have revealed the brief video clip they were sent by Isis to prove that the American hostage was still alive in 2013, just a month after she was taken prisoner.

It offers a glimpse into the 25-year-old’s horrifying ordeal before she was killed in captivity in 2015.

“My name is Kayla Mueller,” she says in the video. “I need your help.”

Ms Mueller went missing from from the Syrian city of Aleppo in spring 2013.

Her parents, Marsha and Carl Mueller, later found out she had been taken from a Médecins Sans Frontières car by terrorists.

“I’ve been here too long, and I’ve been very sick. It’s, it’s very terrifying here,” their daughter said to the camera, wearing a black headscarf and a green hijab.

The mp4 video, about 10 seconds long and sent by email to her friend, was received about a month after her capture, and was the last clue of her life.

Broadcast on ABC News 20/20 show, it was the first time the video had been played to the public.

“You just go into almost a catatonic state, I think. You can’t even stand up,” said Carl Mueller, as he described to his first reaction to the video.

His daughter was one of the first hostages kidnapped by the terrorist network. They demanded millions of dollars as a ransom and continued to hold her even after murdering a string of British and American journalists and aid workers.

Her mother, Marsha, said her daughter looked thin in the video, but her eyes were “clear and steady”.

“It broke my heart, but I also saw her strength,” she said.

Negotiations started 10 months after her capture on 23 May 2014 once MSF (known in the US as Doctors Without Borders) handed over an Isis email address, two months after they had received it from some of their workers who had been freed from captivity.

Jason Cone, executive director of MSF-USA, told ABC News that MSF had no responsibility for Ms Mueller as she was not an employee. He said MSF were not hostage negotiators and it would have put their own staff and work at risk.

“There is risk inherent in humanitarian work in conflict, but we rely on people who are willing to take those risks to help us reach people in need around the world,” MSF said in a statement.

“It’s awful to know that people like Kayla Mueller, who carried a very similar spirit into the world, died during efforts to reach some of those same people.”

The Mueller family received nine emails from the hostage takers. On 29 May, they received an audio clip of her voice.

“Mum and dad, I still am remaining healthy. You should have already received the three answers to the proof life questions you provided. Those detaining me are demanding an exchange of Dr Aafia Siddiqui’s release for my release.”

Aafia Siddiqui is a Pakistani neuroscientist turned al-Qaeda courier and financier who was convicted for attempted murder of a US national and is serving 86 years behind bars in Texas.

“If this is not achievable, they are demanding five million euros to ensure my release,” Ms Mueller said in the clip.

In a last words to her parents, she said: “Goodbye.”

Isis sent her parents three photographs of their daughter’s dead body by email. She was said to have died in a US airestrike but the cause of death has been disputed.