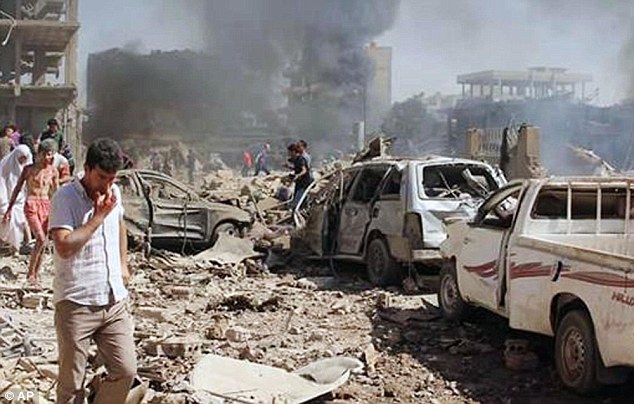 One bomber detonated an explosives-rigged vehicle at the southern entrance to Tikrit, while another other blew up an ambulance at a car park in Samarra, possibly in concert with a third bomber.

The Tikrit attack killed at least 15 people and wounded at least 33, while at least 10 died and at least 25 were wounded in Samarra, security and medical officials said.

Iranian pilgrims were among the victims in Samarra, which is home to a major Shiite shrine that was bombed in 2006, setting off a wave of brutal sectarian violence.

IS issued a statement claiming Sunday’s attacks, but said there were three suicide bombers: two who struck Samarra and the third who attacked Tikrit.

A police lieutenant colonel also said there was a second bomber who attacked the car park in Samarra, but other sources only mentioned one in the city.

The IS statement identified two of the bombers as “Al-Moslawi” — a nom de guerre that would indicate they were from Mosul, though it could be a propaganda attempt to link militants from other areas with the ongoing battle for Iraq’s second city.

Iraqi forces are fighting to retake Mosul, the jihadist group’s last major urban stronghold in the country, in a massive operation that was launched on October 17.

IS has carried out a series of diversionary attacks since the start of the Mosul offensive in a bid to draw both attention and forces away from the battle.

But aside from the names of the two bombers, the IS statement made no reference to Mosul.

The Sunni extremist group overran large areas north and west of Baghdad in 2014, but Iraqi forces backed by US-led air support have since regained significant ground.