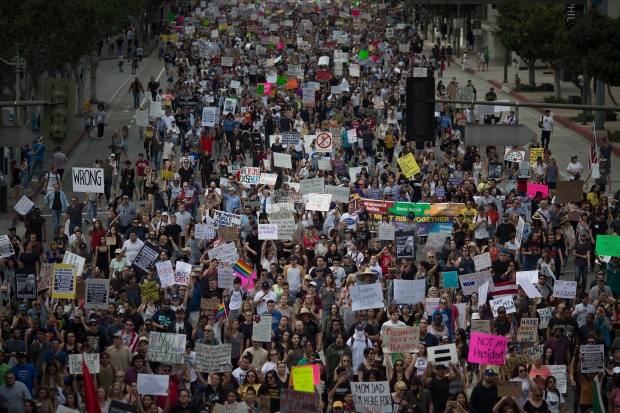 Demonstrators across the United States took to the streets for a fifth straight day on Sunday to protest president-elect Donald Trump, whose campaign manager said President Barack Obama and Democrat Hillary Clinton should do more to support a peaceful transition.
Protests were scheduled for Sunday afternoon in New York City and Oakland, Calif., according to online announcements.
Thousands in several cities have demonstrated since the results from Tuesday’s election showed Trump lost the popular tally but gained enough votes in the 538-person electoral college to win the presidency.
Largely peaceful demonstrators have decried Trump’s campaign promises to restrict immigration and register Muslims, as well as allegations the former reality-TV star sexually abused women.
Dozens have been arrested and a handful of police injured.
Chanting “not my president” and “love trumps hate,” people marched in New York, Los Angeles, Chicago and elsewhere on Saturday, saying Trump threatens their civil and human rights.
Civil rights groups have monitored violence against U.S. minorities since Trump’s win, citing reports of attacks on women in Islamic head scarves, of racist graffiti and of bullying of immigrant children. They have called on Trump to denounce the attacks.