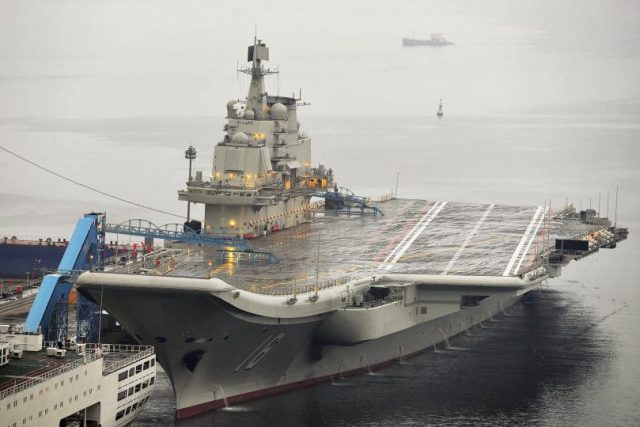 “As a military force, we are always prepared for war and our combat capacity also needs to be tested by war,” Li Dongyou, the political commissar aboard the Liaoning, said. “At this moment, we are doing our best to promote our strength and use it to prevent war, and are prepared for actual combat at any time.” According to the Global Times, the aircraft carrier has formally been described as “having a real combat capacity.”

The Liaoning was originally built as a “heavy aircraft-carrying cruiser” for the Soviet Navy, but construction of the carrier was left unfinished due to the collapse of the Soviet shipbuilding industry in the early 1990s. China purchased the unfinished hull of the Admiral Kuznetsov-class carrier from Ukraine in 1998. Once in China, the carrier underwent substantial modernization and was eventually commissioned in 2012. Ever since then, the carrier has officially been classified a training ship and continues to serve as a test platform for PLAN carrier-based naval aviation.

The Liaoning can accommodate an air wing of 24 Shenyang J-15 multirole fighter jets, a variant of fourth-generation Sukhoi Su-33 twin-engines air superiority fighters, and up to ten rotary wing aircraft including Changshe Z-18, Ka-31, and Harbin Z-9 helicopters. The PLAN certified its first air wing of domestically trained J-15 pilots in 2015. The U.S. Department of Defense estimated that the first air wing will deploy on the new carrier in 2016. It is likely that the political commissar was referring to this when declaring the ship ready for combat.

The carrier is fitted with a powered aircraft -launching system, a ski-jump assisted Short Take-Off But Arrested Recovery (STOBAR) launch system, for fighter jets aboard the carrier.