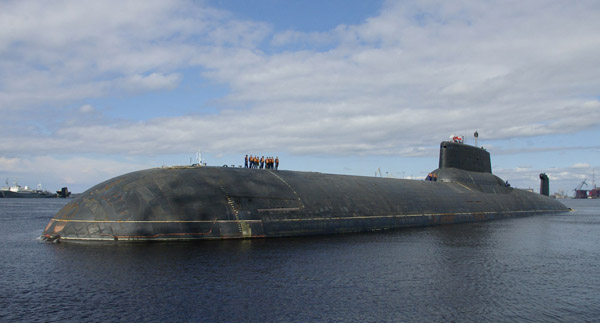 The existence of the Akula-class was not widely known and probably would not ever have been but for the novel The Hunt for Red October. Published by Naval Institute Press in 1984, it was the debut novel of military enthusiast and insurance salesman Tom Clancy. Clancy envisioned a modified Akula-class submarine, Red October, whose disillusioned captain and crew were attempting to defect to the United States.

The largest submarines ever built were not built in American shipyards, but Soviet ones. Named after sharks, these Cold War leviathans could devastate up to two hundred targets with warheads six times as powerful as those that exploded over Hiroshima. The Akula-class submarines were some of the most terrifying weapons ever created.

The Akula (“Shark”) class, or Project 941 as it was known during development, was designed to form the basis of the Soviet Union’s nuclear deterrent forces at sea. The Soviet Union had gotten wind of the U.S. Navy’s impending Ohio-class fleet ballistic-missile submarines, which would be 564 feet long and pack 192 nuclear warheads. The Soviet leadership decided it needed a submarine of its own to respond to the looming threat, and the Akula class was born.

The Akulas were designed to launch their missiles from relatively close to the Soviet Union, allowing them to operate north of the Arctic Circle, where Soviet air and naval forces could protect them. As a result the submarines were designed with a reinforced hull that was capable of breaking through polar ice, a large reserve buoyancy to help it surface through ice and a pair of shielded propellers to protect them from collisions with ice.

Another result was the development of a new nuclear-tipped missile with a long enough range to strike the the United States from arctic bastions. The R-39 Rif (NATO code name: SS-NX-20 “Sturgeon”) was a huge three stage ballistic missile fifty-three feet long and weighing eighty-four tons. With a range of 4,480 nautical miles, the R-39 could strike any point in the continental United States.

The Cold War arms race was above all a competition, and warhead count was important. Because the Akulas carried only twenty missiles to the twenty-four missiles of the Ohio class, each Soviet missile had to carry more nuclear warheads than the American Trident C-4. A single R-39 packed ten one-hundred-kiloton warheads, each independently targetable so that a single missile could strike ten different targets within reasonably close range of one another. This drove up the size and weight of the missile, but it also meant that each Akula had a grand total of two hundred warheads—eight more than the Ohio class.

The Akula class was 564 feet long, just four feet longer their American equivalents. While the Ohio boats had a beam of forty-two feet, the Akulas were a staggering seventy-four feet wide—necessary to pack both missiles and such a large reserve buoyancy into her bulk. The result was a submarine that, at forty-eight thousand tons, was more than twice the submerged displacement of the American submarine.

The Rif missiles were built in two rows of ten missile silos each. Unlike other missile submarines, the silo field was in front of the sail, giving the Akula class its unconventional appearance. The giant submarines were capable of twenty-two knots on the surface and twenty-seven knots submerged thanks to two OKB-650 nuclear reactors—the same reactors that also powered the Alfa- and Mike-class submarines—giving them a total of nearly one hundred thousand shaft horsepower.

Eight Akula subs were planned but only six were eventually built. Those six were inherited by the Russian Navy after the collapse of the Cold War, and today only one, Dmitriy Donskoy, is still in service, with two others in what seems like limbo. Donskoy has served as a trials submarine for the development of the new 3M14 Bulava missile. The development of the Bulava, lengthy and difficult as it was, appears complete and it is likely the sub will be decommissioned soon.

The existence of the Akula-class was not widely known and probably would not ever have been but for the novel The Hunt for Red October. Published by Naval Institute Press in 1984, it was the debut novel of military enthusiast and insurance salesman Tom Clancy. Clancy envisioned a modified Akula-class submarine, Red October, whose disillusioned captain and crew were attempting to defect to the United States.

Red October was larger than a standard Akula, with twenty-six missile launch tubes instead of twenty. Red October was also fitted with a quiet-running pumpjet drive that, according to the novel, would theoretically allow it to sneak up on the East Coast of the United States and launch a devastating “decapitation strike” that would destroy Washington, DC. In the novel, this made the Red October a first-strike weapon and a treasure trove of technology the U.S. Navy was eager to get its hands on.

Thirty-two years after publication, pump-jet engines are now a mainstay on submarines across the world. The Royal Navy’s Astute-class and the U.S. Virginia-class attack submarines both use pump-jets. The Russian Borei-class subs, Moscow’s first real post–Cold War design and in many ways the successor to the Akula class, also uses pump-jet technology. Just another case of fiction becoming reality.