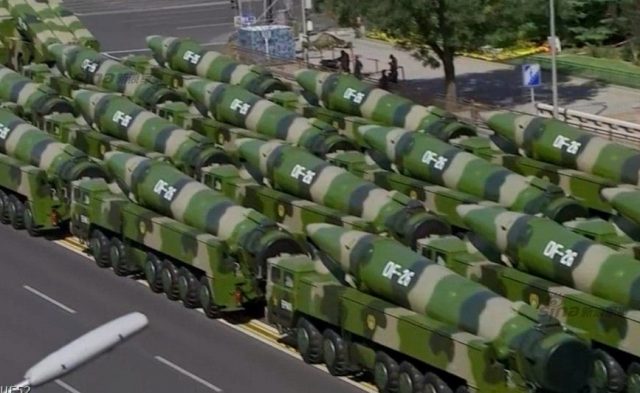 Dongfeng-26 (DF-26), a ballistic missile with medium to long range, led the armament formations of the Rocket Force’s parade debut to mark the 90th anniversary of the People’s Liberation Army (PLA). The missile can strike large moving targets within 4,000 kilometers, a military expert told the Global Times.

Five models of China’s homemade conventional and nuclear missiles, including the DF-26, the DF-21D, the short-range DF-16, and two intercontinental missiles, were shown at the parade held on July 30.

The sequence of the formations was based on assessed military threats and real combat simulations, Yang Chengjun, a Chinese missile expert and quantum defense scientist, told the Global Times.

DF-26 is China’s only missile fitted with nuclear and conventional warheads, and it can preciously strike medium-to-long range targets, providing deterrence and counterattack capabilities. It is of great importance in modern warfare because it can strike large-sized static targets on land and even moving targets on water as far as 4,000 kilometers, Yang said.

The DF-21D land-based anti-ship ballistic missile, described as the “carrier killer,” followed the DF-26. The missile can sink a carrier and is difficult to intercept. It is also of strategic importance, Yang said, adding that the improved DF-16 missile has even greater range and better precision.

This is the debut of the newly formed Rocket Force in China’s grand military parade.