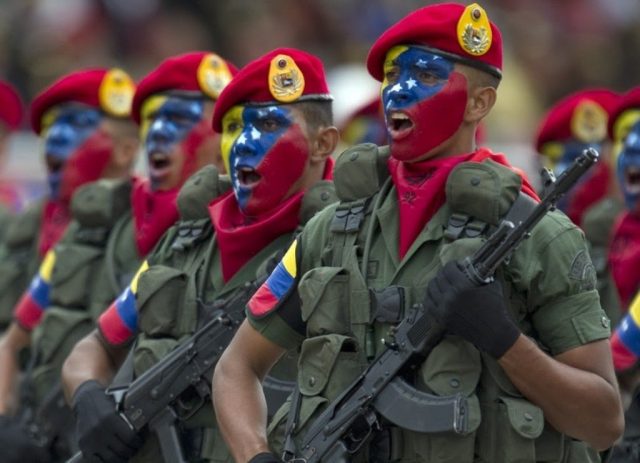 CARACAS: Venezuelan leader Nicolas Maduro on Monday ordered his armed forces to carry out a national exercise next week in response to US President Donald Trump’s threat of possible military action.
“I have given the order to the armed forces’ joint chiefs of staff to start preparations for a national civil-military exercise for the integrated armed defense of the Venezuelan nation,” he told thousands of supporters in a Caracas rally.
The drill will take place August 26 and 27, he said.
Maduro’s government has seized on Trump’s warning last Friday that he was looking at a range of scenarios against Venezuela, “including a possible military option if necessary.”
Venezuelan Defense Minister General Vladimir Padrino called it “crazy,” saying it showed America had “dropped its mask” in terms of wanting to attack his country.
The Maduro administration says Trump’s words bolster its oft-repeated claim that Washington has designs to grab control of Venezuela’s proven oil reserves, the largest in the world.
The threat, made in response to Venezuela’s deepening economic crisis and Maduro’s moves toward what the US labels a “dictatorship,” has been rebuffed by all of Latin America — even countries opposed to Venezuela.
The Pentagon said it had received no orders from Trump to ready any sort of military action against Venezuela.
US Vice President Mike Pence, who is touring allies in Latin America to marshall joint action against Caracas, said Trump’s warning stood — but he hoped a “peaceable solution” would be found.