Tactical Talk (Update) In the Philippines, the first Islamist groups were born in the late 1990s. The name of the biggest of these groups was Abu Sayyaf. In the past, it was the main partner of the Al Qaeda network in Southeast Asia. Several of its members were alongside Bin Laden in Afghanistan. In the last 3 years, more than 60 groups in Southeast Asia pled allegiance to caliph al-Baghdadi, this is according to the International Centre for Political Violence and Terrorism Research in Singapore. In November 2014, Dabiq, the English-language magazine of the Islamic State, wrote and confirmed about that. Unfortunately today the influence of ISIS has spread in all Southeast Asia. 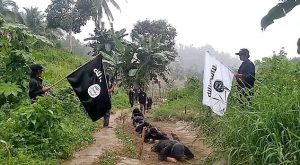 The geopolitical issues, in the Middle East, are dominated by Russian and American interests and by Sunni Saudi Arabian, and Shiite Iranian competition. The business in the Middle East is energy based, oil and gas mainly, and thanks to this it brings military activity in this areas. We have to consider how the Southeast Asia issue is completely different to the Middle East. For example, Isnilon Hapilon, the head of the Abu Sayyaf group, was endorsed by ISIS as the emir for Southeast Asia in 2016. However, he didn’t speak Arabic or English and his religious knowledge was very limited. In addition, in the Philippines the foreign fighters come from Indonesia and Malaysia, very close countries, but they have never set foot in Syria. A local news agency – Ràppler – reported that just one Filipino fighter had been confirmed in Syria. However the Islamic State could surge in Southeast Asia as it lost territory in the Middle East, U.S. intelligence officials have expressed particular wariness in recent days over the group’s push to hold territory in the southern Philippines.

Indonesia is the world’s biggest Muslim-majority nation. But the Philippines is a predominantly Catholic country and only Mindanao has a significant Muslim population. Like Syria, also in the Philippines, the extremist doctrine has been used to recruit followers. However, the real reason for the separatist claims historically is that the southern islands wanted to separate from the other territories. Muslims who settled in Mindanao five centuries ago resent the country’s Catholic majority for what they see as controlling an unequal share of resources. In Mindanao, main south island, some of the 20 rebel groups advocate political autonomy.

On the 23 of May, the Armed Forces of the Philippines entered Marawi city, on the island of Mindanao, to fight the Islamist extremists who had taken control of the city. So the president of the Philippines, Rodrigo Duterte, has declared martial law. But the Philippine army is not used to fighting in urban areas. Like Marawi City. So the Americans sent military aid and the U.S special Forces taught battle skills, too. In addition, the FBI offered a reward of $5 million for information about Hapilon. It has been a key issue in the success against ISIS. Thanks to American forces, in October the Philippine army killed Isnilon Hapilon during a battle. He, who was on the US list of “most wanted terrorists”, was killed along with another wanted militant, Omar Maute. The Philippine troops confirm the importance of American army and U.S. intelligence support. On the island of Mindanao, more than 800 militants were killed in the nearly 150 days of fighting, and about 1,700 hostages have been rescued.

For now, that struggle still revolves around Marawi and Mindanao because in these places the poverty rates are higher and the education is lower than in the rest of the country. Tracking says people in the Philippines still support the U.S. military presence in the region. They say that the U.S. would defend them if they get into a cònflict. People are particularly worried about ISIS using the southern Philippines as a gateway to establish a base in Southeast Asia. But a Pew Research Center survey found that 4% of the population is in favor of ISIS. That’s 10 million people. The Islamic State’s influence in the Philippines is far from over.

Washington no longer has military bases in the Philippines. But a 1951 mutual defense treaty permits the two governments to come to the aid of each-other. The American helps reflects the strategic importance of Philippines in a problematic territory with Cina and North Korea emphasizing US interests in it. President Trump, in the Philippines today, boasts indeed of ‘great relationship’ with Philippines’ Duterte at first formal meeting. As we have seen more recent agreements have seen the American military acting as advisers to Philippine forces. But the broader conflict will keep going because Abu Sayyaf sympathizers are still around. They can quickly form sleeper cells elsewhere on Mindanao where the group operates, says Eduardo Araral, associate professor at the National University of Singapore’s public policy school. This terrorism inspired by ISIS will not go away for about 7 to 10 years. The death of Hapilon may come to signal the final stage of the conflict in Marawi between ISIS-linked militants and the government, but now the people fear that fighters could resort to traditional types of terror attacks.