Twenty-three of the EU’s 28 member nations signed up to the process, known as permanent structured cooperation, or PESCO. Britain, which is leaving the EU in 2019, and Denmark with a defense opt-out were among those not taking part.

EU foreign policy chief Federica Mogherini described it as a “historic moment in European defense,” and added that “23 member states engaging booth on capabilities and on operational steps is something big.” Those who didn’t sign up can join later. 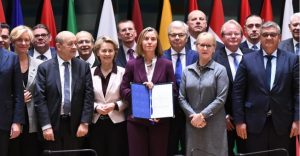 Mogherini said countries have already submitted more than 50 joint projects in the fields of defense capabilities and military operations.

Britain can take part in some if they are of benefit to the entire EU.

She said PESCO, backed by the EU defense fund, “will enable member states to use the economy of scale of Europe and in this manner to fulfill the gap of output that we have.”

Their signatures are a sign of political will but the program will only enter force once it’s been legally endorsed, probably in December.

German Foreign Minister Gabriel lauded the agreement as “a great step toward self-sufficiency and strengthening the European Union’s security and defense policy – really a milestone in European development.”

Under the cooperation, member countries will submit an action plan outlining their defense aims. Mogherini, EU military chiefs and the European Defence Agency will then evaluate whether the plans are being respected.

Those not living up to their commitments could be kicked out of the group.

EU officials insist this is not just bureaucratic cooperation, but a real investment that will help develop Europe’s defense industry and spur research and development in military capabilities that the bloc needs most.

Mogherini said the move would complement NATO’s security aims. The EU, she said, has tools to fight hybrid warfare – the use of conventional weapons mixed with things like propaganda and cyber-attacks – that the military alliance does not have at its disposal.

The EU can also bring its political and financial weight to bear on security challenges, such as the use of development aid in Africa, where NATO has no real foothold.

Under PESCO, EU countries will commit to increase military spending, but not to specifically adhere to NATO’s bottom line of moving towards 2 percent of gross domestic product for defense budgets by 2020. By working together on joint projects, nations will be able to use their combined spending weight to purchase much needed capabilities like air transport or drones.

“The real problem is not how much we spend, it is the fact that we spend in a fragmented manner,” Mogherini said.

Gabriel said working together is “more economical than if everyone does the same. I think that European cooperation on defense questions will rather contribute to saving money – we have about 50 percent of the United States’ defense spending in Europe, but only 15 percent of the efficiency.”