Tactical Talk (Update) In the following report, a strategic overview is laid out with the explicit purpose to inform and activate leading citizens and policy makers towards the strategy needed to re-align our nation from the shackles of the British Empire’s collapsing monetarist system, towards the new paradigm exemplified by the BRICS and China’s New Silk Road. The full program for the New Silk Road which this report is meant to compliment can be found in the 2014 EIR Special Report The New Silk Road Becomes the World Landbridge and the accompanying 2015 The US Joins the New Silk Road 38 page report.

This re-alignment is necessary not only to reconstruct our self destroyed physical economic base, but to lift humanity out of British geopolitics, and closed system thinking which is driving victim nations within NATO towards a thermonuclear world war.

The editors of the Canadian Patriot are proud to present the following report as a blueprint for the survival not only of Canada, but of all humanity. Our report begins with the presentation of several strategic mega projects which will allow us to return to the path of pro-scientific and technological progress which was abandoned during the post John F. Kennedy era of “post industrialism” and “consumerism”. We end our report with several economic measures which must be adopted in harmony with the United States beginning with the restoration of Canada’s Glass-Steagall law (aka: “Four Pillars”), and the re-activation of the Bank of Canada as an instrument of Hamiltonian credit generation.

1. Join the BRICS and the New International Economic System

A new global paradigm has arisen on this planet centered on the outlook of scientific and technological progress, rather than monetary doctrines which has so long plagued the collapsing Western world. This new paradigm has grown out of the seeds planted and nurtured by over 40 years of global work by American Economist and Statesman Lyndon H. LaRouche, who has been at the forefront of the international program for this system since his first presidential campaign in 1976.

This new paradigm has been best exemplified by the China-led inter-civilisational New Silk Road program, Russia’s Trans Eurasian Development Belt, India’s Mars program, China’sHelium-3 Lunar Mining Program and Russia’s Strategic Defence of Earth against asteroid threats. These visionary projects for the next hundred years of development are not only the direct outgrowth of international LaRouche organization, but are a total contrast from the vision-less collapsing Trans-Atlantic monetary system governed by the Anglo Dutch financial oligarchy.

The first thing Canada must do, along with our American and European allies is join the BRICS (Brazil, Russia, India, China and South Africa), whose leadership is opening the door for a new kind of development through a “win-win” cooperation among nations based on the highest discoverable principles of the universe and their effects on increasing the energy flux density of the human species.

In this spirit, Canada’s most direct role in joining this process of optimistic development is by accepting the China/Russian offer to bridge Asian and American continents by constructing the long awaited Bering Strait tunnel. This project has already begun with the New Silk Road development corridor in Eurasia, the Silk Road Fund, Asian Infrastructure Investment Bank (AIIB), New Development Bank and the newly announced $248 billion Beijing-Moscow high speed rail line through Kazakhstan. Russia and China over the past years have made it clear that they support connecting this program to North America through the Bering Strait beginning with Russia’s August 2007 offers and amplified by China’s offers in May 2014. This project would not only involve the completion of the long overdue 2280 km Alaska-Canada rail line begun by BC’s great Premier W.A.C. Bennett during his 1952-72 leadership of B.C., but would extend into Alberta and on towards the east coast of Canada, and also down through the United States in several branches creating millions of jobs, new industries and opening up the Arctic in ways never before imagined.

Similar China-sponsored trans-continental rail and water projects such as the Trans Continental Rail corridor from Brazil to Chile, and the Nicaraguan Canal are already creating a field of development which will make the long overdue rail connection through Panama finally a reality.

LaRouche On The Record:  A New International Economic Order
For over four decades, physical economist Lyndon LaRouche has provided the intellectual and political leadership in the fight for a new international economic order for the planet, for the purpose of ending the historic imperial control of monetarism and unleashing mankind’s creative powers as a species.

The profound impact of LaRouche’s intellectual leadership is clearly reflected in the current actions being taken by the BRICS nations and others to create a new global financial architecture and strategic alliance among nations, with the recent establishment of the New Development Bank (NDB) and related developments.

A partial timeline of LaRouche’s role in leading the fight for a new international economic order is chronicled below: 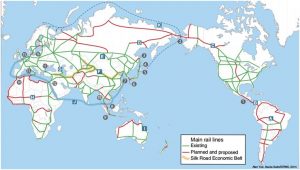 PLANNING THE PRESENT STARTS FROM THE FUTURE

In a strained world looming on the brink of collapse and thermonuclear war on the one hand, and a new paradigm of mutual development and peaceful co-existence on the other, Canada’s close geographical relationship to both the United States and Russia provides an ideal opportunity to act as a bridge uniting two parts of the world around advanced scientific, cultural and nation building endeavors centering around such programs as space science, nuclear energy, and arctic development. The lynchpin for these programs cumulatively driven by the World Landbridge (expressing itself as the “New Silk Road” program of China already under construction), remains a centuries long program called the Bering Strait Rail Tunnel, has been heralded by Lyndon LaRouche for over three decades as beacon of hope for world peace.

What would accepting the Russia/China offer to build it entail for Canada? What will be reactivated within our nation building history which Canadians have forgotten during 40+ years of post industrial rot?

First and foremost, this New Silk Road program would mean abandoning the post-industrial system that replaced the 1945-1971 policy scientific and technological growth. The 40 year cage of oil exploitation for global geopolitical manipulation under the post 1971 “petro dollar” has created a speculative instability within the entire world which has resulted in Canada’s near implosion recent years culminating in the meltdown of the Alberta “oil economy”.

The Bering Strait Development Corridor demands a systemic top down evaluation of Canada’s potential, not merely as a resource exporter, but as a driver of fundamental scientific progress in order to increase the energy flux density of humanity as a whole. Our frontiers obviously are found by pressing on the boundaries of human knowledge, in the atomic field on the immeasurably small, and in the space field on the immeasurably large. Geographically, the boundaries determining the last frontiers of earth are established by the Arctic.

Before proceeding to the most optimal choices of least action pathways and projects available for Canada within the context of a new emerging paradigm, it is important to take a brief inventory of the nature of the phyisical economy that we are dealing with. On a geographic level, The layout of Canada’s development has to take into account the three fundamental zones:

1) Urban- Industrial where 80% of our population is located,

3) Arctic where less than 1% of Canadians live

As the 2011 Lpac paper “Arctic development and Self Developing Systems” and accompanying video “Breaking the Ice on Arctic Development” makes clear: True nation building must begin with the most underdeveloped region as the driver (the Arctic), which will then permit the mobilization of resources in order to “leapfrog” older technologies towards the cutting edge high energy flux density