Tactical Talk (Update) EuroAsia Enterconnecte Project is designed by EU which is an interconnector between Greek, Cypriot, and Egypt power grids via submarine power cable. the Greek Cypriot Administration, has issued a notice for the expropriation of the land for the HVDC converter station of the EuroAsia Interconnector, the 2000MW 1,518km subsea cable that will connect the electricity grids of Cyprus, Israel, Crete and Attica in Greece. This Project has been declared a European Union Project of Common Interest (PCI).

Through decree 714 published in the Official Gazette of Greek Cypriot, Issue No. 4841/2018, the government issued an expropriation order and description of the land site for the converter station located near Kophinou, saying “this was necessary for the purpose of the public good, being for the promotion and development of energy.” The decree concluded that as no objections were submitted within the predetermined timeframe, the Greek Cypriot Minister of Energy, Commerce, Industry and Tourism executed his authority as determined by the Council of Ministers and ordered the expropriation of the said property in accordance with the provisions of the law which will be leased to the Project Promoter of the EuroAsia Interconnector. This Project is planned to finish in December 2020 for the Crete-Attica interconnection and December 2021 for both the Cyprus-Israel and Cyprus-Crete interconnections. The village of Kophinou was belonged to Turkish Cypriots in pre1974. Greek Cypriots without giving an information or compensation of TCs, acting against the international property law.

On the other hand, Greek Cypriots and Egypt have agreed on the route of a 1,707-kilometre sub-sea power cable that will link the grids of the two countries to that of Greece, EuroAfrica Interconnector, the company behind the Project. Main target is connect the electiricity grids of Greek Cypriot, Egypt and Greece with Europe. Additionally,  transforming Egypt as an electricity hub for Africa and agreed the electricity cable route, the landing point and the site of the HVDC (high-voltage, direct current) converter station”.In addition to the route of the cable also the timeframe of the project’s implementation, EuroAsia Interconnector. The EuroAfrica Interconnector project is parallel to a similar one dubbed the EuroAsia Interconnector, linking Israel with Greece through Cyprus via an underwater cable. 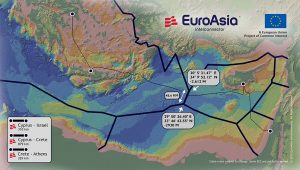 In fact all these efforts violate the Turkish Cypriots rights even Turkish maritime jurisdictions. In accordance to the UNCLOS,article 79(3) related to Submarine cables and pipelines on the continental shelf;

79(1) mentiones that All States are entitled to lay submarine cables and pipelines on the continental shelf, in accordance with the provisions of this article. Whereas article 79(3) bring restrictions to 79(1) which states The delineation of the course for the laying of such pipelines on the continental shelf is subject to the consent of the coastal State. This article is so clear. The Parties never demand any permission from Turkey. Whereas planned enterconnector cable lying Project  will passed into Turkish continental shelf. In this respect all them violate the international maritime law which can not be ignored.

On the other hand, in western Mediterranean Turkey gave licence to TPAO as shown below : 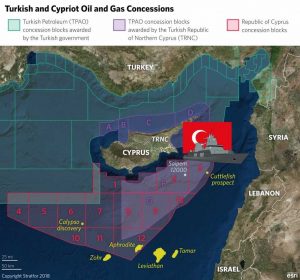 In accordance to this licencing agreement Turkey also has the rigth to prevent this cable lying in accordance to the article 79(2) of UNCLOS. This article points out that Subject to its right to take reasonable measures for the exploration of the continental shelf, the exploitation of its natural resources and the prevention, reduction and control of pollution from pipelines, the coastal State may not impede the laying or maintenance of such cables or pipelines.

TPAO activities in Turkish continental shelf may be evaluated as reasonable measures for the exploration of the continental shelf and the exploitation of its natural resources. Greek Cypriots and its supporters ignores the Turkish maritime jurisdictions in Mediterranean and acting against international law and its principles even case law,customary law. The main target of these group States ,particularly Greece and Greek Cypriot administration, western Mediterranean which the way of cable lying  in Project is belogned to their so called “EEZ” or “Continental Shelf”. If Turkey don’t make any objections to these steps, later they will use this chance for showing these areas “belonged to them”.

No person shall have the right to lay or use or operate a cable in the Continental Shelf of the Turkish Republic, without a licence from the competent authority. Additionally, Greek Cypriots have no right to violate and ignore Turkish Cypriots in Mediterranean.

From this point, Turkey should sent a letter regarding  its objections to UNGS and warned the sides which dont have the right making some steps in Turkish continental shelf without taking permission or giving official information. Because related Parties violate even article 300, which is related to Good faith and abuse of rights. In accordance to this article; States Parties shall fulfil in good faith the obligations assumed under this Convention and shall exercise the rights, jurisdiction and freedoms recognized in this Convention in a manner which would not constitute an abuse of right.

The Parties don’t acting in goodfaith and only constitute an abuse of the rights. This is not acceptable, at least Turkish Foreing Minister, Mevlüt Çavuşoğlu made a speech before one days ago that the drilling activities in Mediterranenan will start soon ,and no concessions will be made against to the any rights of the Cypriot Turks”. It is expected that Turkish government, after presidental elections in Turkey,24 June 2018, will be more proactive in Mediterranean. This stance is the right of Turkey for protecting its maritime jurisdictions also. It should be note that the EASTMED pipline project also is planing to use Turkish continental shelf which same rules are valid, the related parties should take permission from Turkey.

Director Research Centre of the Sea and Maritime Law