(Zain Khan Live) Zain Khan Live: Season 1 – Episode 10 (Islamic Program ) Shaykh Nurjan Mirahmadi, a prominent Sunni Islamic Scholar with a background in classical Islamic studies and Tassawuf explains the importance of love for our Prophet Muhammad (PBUH). This episode was my first episode of ‘Zain Khan Live’ in Islamic programming, it was emotional for me because it was on a topic that was closely connected to my heart & beliefs. 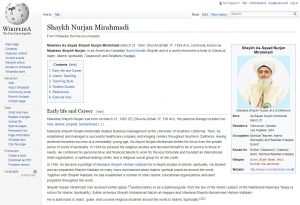 Mawlana Shaykh Nurjan was born on March 21, 1965 CE (Dhul Al-Qi’dah 17, 138 AH). His paternal lineage includes the Holy Islamic prophet, Muhammad.
Mawlana Shaykh Nurjan Mirahmadi studied Business Management at the University of Southern California. Then, he established and managed a successful healthcare company and imaging centers throughout Southern California. Having achieved business success at a remarkably young age, As-Sayed Nurjan MirAhmadi shifted his focus from the private sector to world of spirituality. In 1994 he pursued his religious studies and devoted himself to be of service to those in needy. He combined his personal drive and financial talents to work for the less fortunate and founded an international relief organization, a spiritual healing center, and a religious social group for at risk youth.

In 1995, he became a protégé of Mawlana Shaykh Hisham Kabbani for in-depth studies in Islamic spirituality. He studied and accompanied Shaykh Kabbani on many tours and learned about Islamic spiritual practices around the world. Together with Shaykh Kabbani, he has established a number of other Islamic educational organizations and relief programs throughout the world .

Shaykh Nurjan Mirahmadi, has received written ijazas [1](authorization) to be a Spiritual guide, from the two of the World Leaders of the Naqshbandi Til-Aliyya Tariqa (a school for Islamic Spirituality); Sultan al-Awliya Shaykh Muhammad Nazim al-Haqqani and Mawlana Shaykh Muhammad Hisham Kabbani.

He is authorized to teach, guide, and counsel religious students around the world to Islamic Spirituality.